As summer begins to slide away, the weather is distinctly mixed, gardens become parched or battered from the cycle of dry to wet weather. Charleston beckoned. It had been a few years since I had last visited before covid 19 and with my painting in need of a fresh angle, here was a refuge for the visual creative.

Not least due to watching the drama series ‘A Life in Squares‘, which has received mixed reviews, the inspiration strikes again.

For all the reception, it naturally fires up a desire to get out again and see the landscape, Sussex, gardens and painted places. Charleston for one, has all this. In it’s heyday it also provided a remote, useful and secluded home for a daring and unconventional family living ‘in triangles’. Lovers of both sexes living with their husbands, wives, lovers of any sexual persuasion and children, altogether.

There is much to read on the ‘Bloomsbury set’ which began life in London: Bloomsbury, after flinging off every scrap of their repressive, dismal, Victorian upbringing. Beauty and truth was their philosophy.

Once the entire family had departed and moved away, the long rented house owned by Lord Gage of Firle Place nearby, was due for white washing in preparation for the next tenant. But at the eleventh hour, some influential and inspired devotees became alert to the dire plan and managed to raise enough funds from the sale of a Matisse, amongst other avenues, to save Charleston. Today it is recreated and restored from the shabby worn down home it had become.

In 2015 and in 2021 the fairly simple yet classic design motifs, of circles, crosses and lines painted onto many surfaces is easily recreated at home for those who have painterly hand and eye. Not every room is to my taste, some colours look very muddy, and would struggle to improve every style of home. However in a Victorian farmhouse with original sash windows, you can get away with a wide variety of schemes.

The garden is equally artistic, ideally formulated on a fairly flat square, enclosed within attractive high walls, keeping any local wildlife out, with busts of heads dotted about the top. It is the ideal size to manage, it could have been less high maintenance if one wanted, but with a gardener on hand, why bother!

The hollyhocks were the stars this season (see below 2021), climbing about ten or eleven foot in the air, rich pinks and maroons. I’ve never had success with them, apparently they like dust and gritty bad soil, lots of sun with no love! Dahlias added a rich tone, rather narrow paths I felt, however this was punctuated by an attractive, very firm, wavy box hedge. I find this garden has gritty but punchy impact on the mind and memory, being smaller than Perch Hill, or Sissinghurst it really add a fiery zing to the day. A small walled garden is a really the best design I think.

At the front of the house is a large pond, which makes an imposing setting on arrival. This side of the house might have offered friends a place to sit out at a table to have meals in summer. At the back of the square garden, there is a modest but intensely planted area of kitchen garden, stuffed with sweet peas, beans and herbs and architectural artichokes. All lovely, but it does contrast sharply with the stark terrace paved area, which I felt could do with some more garden furniture.

Nevertheless it made a pleasant afternoon out and resulted in a few quick sketches, and more inspiration for painting.  I wondered how many families today could live the philosophy of freedom and love in the Bloomsbury style. In spite of their privileged position, they still had a remarkable ability to live their theory of flexible, workable relationships of all kinds. 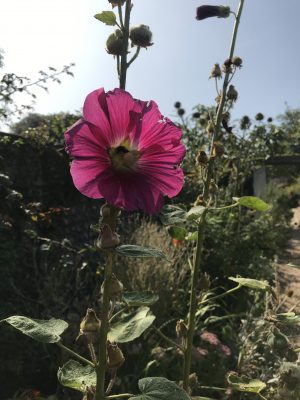 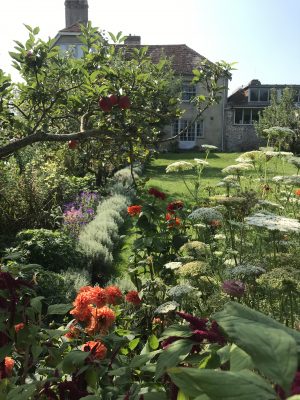 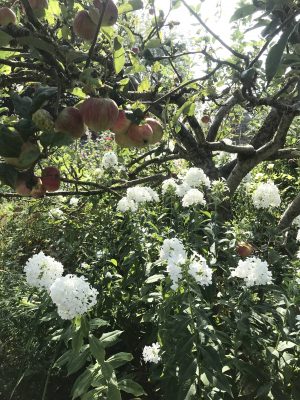